Dragons at Crumbling Castle: And Other Stories 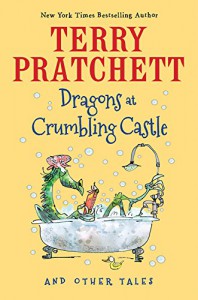 A collection of short stories that Sir Terry Pratchett wrote for a child-friendly audience whilst he was a young journalist on a local newspaper. Collected here, along with some wonderful illustrations by the Dahl-drawer, Quentin Blake, are (I assume) a book of fourteen the best ones.

It's a mixed collection (topically) but the general outlook is the same: very Pratchett-esque fantasy stories that use real-world events or situations and plonk them straight in the middle of a fantasy world. There is a commentary after each story about it, which explores the links between it and Terry's later writings, particularly Discworld stories.

Dragon at Crumbling Castle is a lovely collection of stories: some are funnier than others, some are written better than others, but they're all quintessentially Pratchett. I also loved the fact that the stories were not edited in any way, and are in fact directly how they were originally published (apart from the fact that they were serialised in the newspaper; they have been put together fully for the purposes of this book).
Tweet