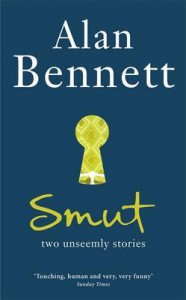 I fell in love with Bennett's 'The History Boys' after the 50 Years of the National Theatre on the BBC showed about 5 minutes of it. After that I was hooked.

Unseemly: not proper or appropriate.

'Smut' contains two short stories about, unsurprisingly, sex. From the title you can identify that those entwined within the stories of sex confront it in a somewhat old-fashioned sense. Sex is either very, very good or quite, quite bad.
In the first, a middle-aged woman discovers enjoyment in watching youngsters have sex, intermittently whilst acting as a fake patient for student doctors. The theme of acting and putting on another face is prominent through-out (also found in 'The History Boys') and strikes to the heart of how most of us live our lives. In any number of ways we are acting as part of our daily routine; be it with make-up, with lies or with blatant hypocrisies.

The second story is bit more involved: a (unknown) gay man marries a rich orphan woman. His mother disproves, his father cares little and the whole thing is intertwined with blackmail and lies and adultery. Again, the theme of acting belongs solidly to this story, though the lies are far worse than could be found in the first unseemly story.

As to be expected, these stories are different to the play (admittedly the only play I've read) but they are still sublimely Bennett and rather quintessentially English.
Tweet