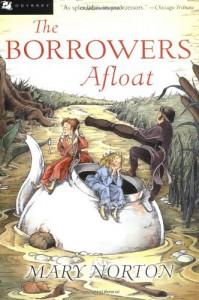 The third in The Borrowers series of books, The Borrowers Afloat sees Pod, Homily and Arrietty living in blighted conditions with their relatives in a run-down cottage that is soon to be left empty because Tom, Arrietty's Human friend, is going to live with his uncle. The Borrower family then make the decision to set out for the much-spoken of Little Fordham, a model village that lies at the end of a dangerous river. With the help of Spiller and his broken kettle, the Borrowers flee their weasel-haunted home and take the journey downstream, where nothing but mad gypsies and the unknown await them.

I don't think I've ever read a Borrower book, even though I am well-versed in the story, which, as an English person, isn't quite as inappropriate and weird as it sounds. Borrowers are similar to Lilliputians in size but that is where the similarity ends. As you can gather from their name, they "borrow" items from the Humans whose homes they inhabit, always keeping out of the way as much as possible. Although technically the Borrowers are stealing, it's always harmless and they're very endearing towards those they "borrow" from. This particular story was interesting because it drove the imagery I had of the Borrowers out of my mind (homely, frightened, comfortable under the floorboards) and basically dumped myself and the Borrowers in the outside world, where birds and rivers threaten their lives at every turn.

It's a lovely children's story that is easily accessible to an adult, though it has a more British-vibe to it because of our history with it. There have been numerous television and film adaptations and the thought of tiny people living under our floorboards as if there were mice is so ingrained in to us it's almost part of our culture.
Tweet