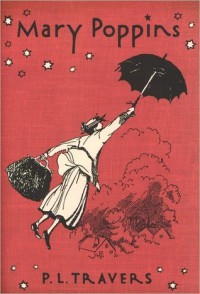 "Something strange and wonderful had happened at Number Seventeen, Cherry Tree Lane."

Mary Poppins arrives at No. 17 Cherry Tree Lane, the house of the Banks', from out of nowhere just as their old Nanny disappears with even less announcement. This is the first book in a series of six about Mary Poppins, and in this instance she concerns herself with the Banks' children, Jane and Michael, and the twins Barbara and John.

What follows after her arrival include days out that turn in to wonderful trips from fairytales and magical happenings that are only remembered in a dream-like trance.

Most of us will know Mary Poppins from the musical film, and that is where I first met the magical Nanny. I didn't even realise Mary Poppins had first been a novel until Victoria Coren Mitchell presented a programme about it before the Disney film Saving Mr Banks came out. I was never entranced by the film, however, but was content enough to hum the songs whenever the occasion arose.

Knowing it was first a book filled me with intrigued, as did the fact that P.L. Travers, author of Mary Poppins, did not like the film much. I found that quite brave and wanted to see why and I have to say that I fully understand why. The only part of the film that I can truly say is as beautiful as the book is the casting, acting and portrayal of Mary by Julie Andrews.

I feel it wrong to continuously compare the book to the film, since they are two different mediums completely, so here they shall part company. Travers manages to write a children's book that does not talk down to children at all, and those are the best kind. The words used are not simplified in to nonsense, nor are they prim and proper like any mother would wish their child to use. It is plain and simple and easy to read, but not so easy upon your imagination. Mary Poppins not only takes Jane and Michael on adventures but has adventures on her own, something which I found to be exceedingly charming especially considering her rather snobbish nature.

I considered giving Mary Poppins 4 stars, but found that I didn't want to, mostly because I haven't read the entire series and feel that I need to rate it as a whole, but also because it wasn't as magical as I was expecting it to be. It was quaint and charming, and I certainly enjoyed every minute of it, but I was not captivated quite as I'd like. Perhaps with more knowledge of this woman whom just blew in off the wind, but who knows?