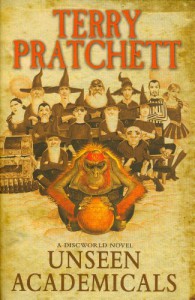 Quite possibly the best Pratchett novel thus far that I have read, if only because, despite my hatred of football, Ankh-Morporkian Wizards plus football equals something completely unmatched by any other humour writer I have encountered. You can have modern football with sci-fi as done by Rankin, or you can have modern football with modern settings ala everybody else, but modern football in Ankh-Morpork? Possibly the only way that football can be enjoyed anymore.
The humour was the fantastic Pratchett-style as usual as being grown-up yet at the same time really rude at times, which is beyond most people.

Possibly the most outstanding part of this novel for me was the character of Mister Nutt. Sublimely crafted by Pratchett, who has always managed to have sufficient characters that are 3D and not flat, shallow or passers-by. Mister Nutt is the epitome of everything wrong with humanity in the way he is treated, created et all, and he is also the epitome character that shows just how good Pratchett is at creating realistic characters, even if they are Goblins! (or any other number of mythical species, for that matter). Mister Nutt probably stands out as the most thoroughly thought through characters in the Discworld.
Tweet