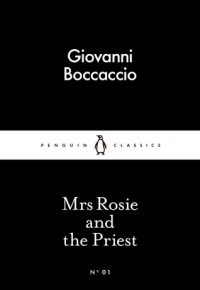 14th Century debauchery and bawdiness from Toscana's Giovanni Boccaccio, book one of the Little Black Classics.

Four short tales about women in an era that doesn't sound too far removed from our own. Whilst the tales are, probably, supposed to show the endeavour and cleverness of women, it does it in a way that is of its time. Well written but obviously translated. An interesting look in to the era of another country, where it's obvious these kinds of themes are universal.
Tweet