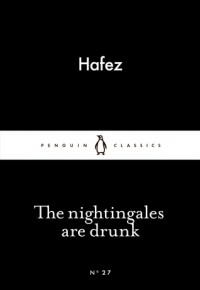 Hafez was a 14th Century Persian poet whose works are amongst the most popular in modern-day Iran. The nightingales are drunk is a collection of his poetry taken from Faces of Love.

Hafez likes wine. He likes drinking wine a lot. He revels in speaking to himself as if he were another person and his drinking is much a common problem with his religious practices.

"Speak Hafez! On the world's page trace
Your poems narrative;
The words your pen writes will have life
When you no longer live."

No poem owns a title and the prevalent theme is, indeed, wine. Personally, I found him pretentious and boring, speaking of wine and wine and referring to himself in the third person and speaking of drinking wine and sitting in a wine shop drinking wine. He was repetitive (wine) and his poems just did not roll well off the tongue. I assume this has a little to do with translation, too, but altogether just a pile of tosh.
Tweet