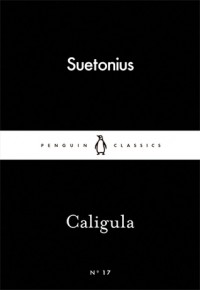 Suentonius was a 2nd Century CE Roman historian, who is best known for his work The Twelve Caesars, in which he writes of the twelve Roman Emperors, from Julius Caesar to Domitian (49 BCE to 96 CE).

This Little Black Classic is a wonder to behold. It recounts the horrors of Caligula, the nickname of Gaius Caesar, 3rd Emperor of the Roman Empire during the 1st century, CE. At the age of 26, Caligula was sleeping with his sisters, stealing wives, having relations with famous dancers and killing anyone he decided to. Suetonius's biography was the original and it recounts the most bizarre and horrendous escapades of a man who would not let any man, woman or child mention goats within his vicinity. It is written so well, but at the beginning there are so many names you may need to place yourself to get to grips with the Roman Empire's lineage. Caligula, whilst obviously severely mentally ill, was also absolutely hilarious, but only with 2000 years worth of retrospective perspective.
Tweet