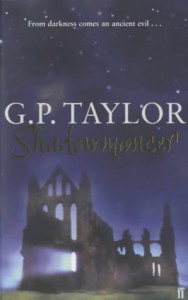 Written in opposition to His Dark Materials and other "atheist propaganda", Shadowmancer tries in vain to be anywhere near as good. It is terribly written, which doesn't always stop something from being popular, but the story is so droll and boring it makes getting through the 300 pages so utterly contemptible. The characters are 2D, but I will say, in some defence, that they were fairly varied and not the same Mary-Sue wish wash you usually get. The plot was barely even a plot and it seemed to have been over in a day (though it actually lasted maybe a week).
It had some nice North-East location-based folklore, which gave it more credence than it deserves, but all in all it's just a Narnia wannabe, without the lyrical prowess or storytelling ability.
Tweet